When creating charts and graphs, many people believe that more colour is better. According to a 2003 study by Xerox, 90% of us believe that colour presentations and documents are more memorable. While colourful charts look nice, how many and what colours you choose can make a big difference on what your chart is communicating.

In a recent analysis of Google Play Store data from August 2018, I wanted to understand the Health and Fitness category. To visualize the size and performance of that category, I needed a chart that communicated the following points:

These two points will help an aspiring app developer determine how crowded the category is and whether their app is likely to succeed. Categories with a lot of apps will make it difficult for a new app to be noticed. Depending on the business model, the more an app is installed, the more money it could make.

First, I visualized each point in basic blue. The chart below shows how many apps are in each category.

The categories are sorted by the total number of apps. Note that Health and Fitness is the 12th largest category. Yet, this chart does not tell you how many installs each app has within each category. The following chart accomplishes that for four different levels of installs, grouped by category.

By using colour and stacking the bar chart, both points can be communicated in one graph.

How Many Colours Is Too Many?

If more colour is better, then I should show more levels of installs. I created seven levels, ranging from less than 1,000 installs per app to over 100,000,000. For the colour, I applied one of the colour schemes provided by the charting software. 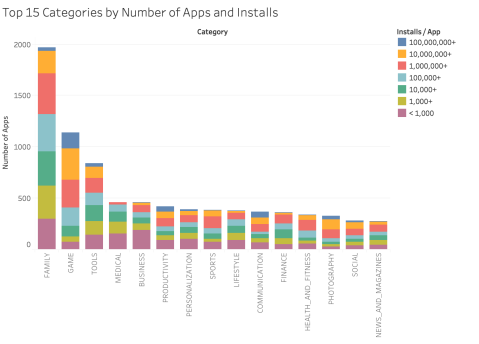 The above chart is colourful, but it is still hard to understand how many apps had more than, say, one million installs. Try to limit the number of different colours to six or less. What if I only showed the top three sections? 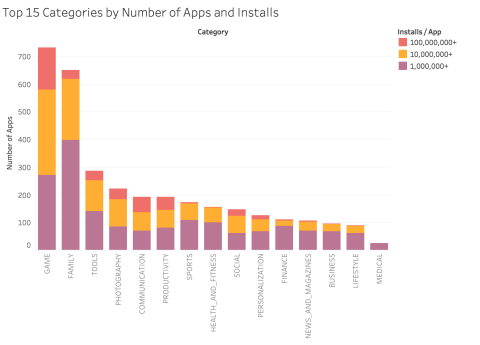 The chart is now less busy and you can clearly see how many apps had more than one million installs. However, you can’t see the proportion of these apps compared with all the apps in their respective categories. You also don’t know the size of each category and how the categories compare. Note that the Health and Fitness category is now in 8th place in this chart. To know the size of each category, I need to include the apps with less than one million installs.

What Colours Should You Choose?

There have been many studies about the psychology of colour. In addition, different colours have different meanings to different cultures. For example, in Canada and the United States, blue is considered trustworthy and official where business is concerned. In Scandinavia, though, blue is associated with being out of money. Therefore, you need to carefully choose your colours based on what you are trying to communicate and who your audience is.

For my stacked bar chart, I first chose two shades of green for the two sections with the most installs. Those are potentially the most successful apps and green is the colour of money in the United States. I’m considering apps with less than one million installs as unsuccessful, so I chose red for that section. I chose a yellow-orange for the apps with over one million installs to communicate that they are moderately successful.  These colours are also widely recognized as stoplight colours. 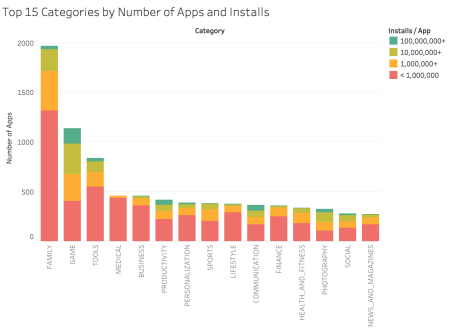 Your eye is immediately drawn to the red at the bottom section. Do you even notice the green?

However, this colour scheme could be confusing to western audiences because green means good. Without looking closely, the red section could be perceived as bad.

When choosing colours, try to choose a neutral palette and use colours like red to attract attention. Here is the same chart using a completely different colour scheme:

Here I used red and orange to attract your attention to the sections with the high number of installs. For the less than one million section, I chose a light blue because it is a calm colour in most cultures. Finally, I used purple for the section with over one million installs because it is a mix between blue and red. This chart communicates the two points, is not too busy, and is easy to understand. The Health and Fitness category is the 12th largest Google Play Store category. Almost half of its apps have between one million and one hundred million installs.

Colour Guidelines For Your Charts

When designing colour charts and graphs, keep in mind the following guidelines:

Resources on Psychology and Cultural Meaning of Colours

After a dozen years leading video game development projects in a variety of roles, I decided to pursue a Master of Data Science at the University of British Columbia. Studying data science doesn’t mean I’m moving away from leading people. Growing data science teams need collaborative, pragmatic, Agile leadership to connect data to all areas of the business. I would like to share that point of view, along with my experiences, on this blog. View all posts by Liza Wood